Showing posts from November, 2012
Show all 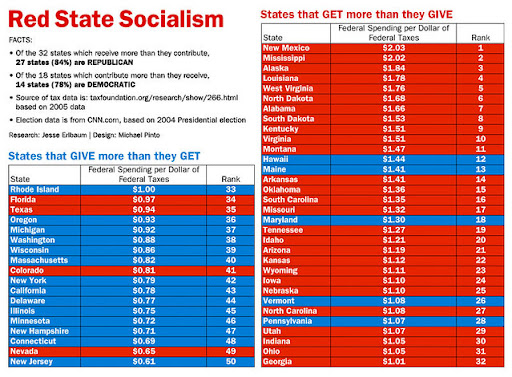 I've heard a lot about this supposed dichotomy between takers and payers in the United States, usually with an implicit or explicit assumption about how the "two halves" vote. But I haven't seen any reference to data that suggests in detail whether it's in fact true that the recipients of federal tax largess principally vote for Democrats. I suspect it isn't, especially if you include all federal spending and not just entitlements. Reliably Republican enclaves such as Wyoming, South Carolina, Alaska, Texas etc. are among the largest per capita recipients of federal money; if people were truly voting in favor of the spigot faced their way, you might expect to see them turn away from those making the most noise about radically slashing the budget. Here's a great graphic about voting and spending patterns, with federal spending aggregated:  If you exclude all non-entitlement spending, I'm still not convinced (due to the complete lack of compelling
Post a Comment
Read more
More posts