Showing posts from July, 2011
Show all

(Fair warning, extremely long post follows) I t's an old standby of election politics that taxes are too high. No one gets elected promising to raise taxes, and no politician would even risk saying that the current tax rates are generally fair. Questions about details generally get limited play because they aren't easily reduced to soundbites. Do we pay more than people in other developed countries? The federal income tax is progressive, but does that reflect the real burden of taxes in the U.S.? Are our corporate tax rates uncompetitive and likely to drive business elsewhere? Bruce Bartlett is a former tax policy advisor for the Reagan and Bush administrations and a former senior staff member for Congressmen Jack Kemp and Ron Paul. Since May he's been a regular columnist for the New York Times Economix blog, and he recently wrote two interesting posts regarding the comparative burden of taxes in the United States. Here is the first, and here is the second. He addre
Post a Comment
Read more

A dishonest debate about the debt 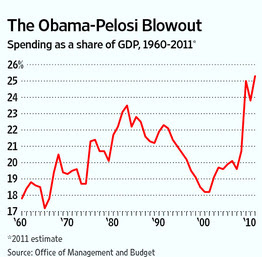 The Wall Street Journal published an editorial today dreading what it called the "Obama Downgrade", referring to risk that the United States might lose the AAA credit rating on its debt. As always, it's the hypocrisy and blatant partisan angling that bothers me about such articles. A fair article would share blame for out of control spending between all of the last 4 presidents; each has contributed to the growth of entitlement spending which now threatens to overwhelm the budget. More particularly, policies of the Bush administration and the Republican Party (which controlled all of government for a large part of both Bush terms) exacerbated the debt and deficit problems of the nation in dramatic ways. This is nicely demonstrated by the chart the WSJ provides for its editorial, although you won't see it framed in quite this way. The 10-year cost of the GOP-passed Medicare Part D act? $1 trillion. The 10 year cost of the "Obamacare" act? $1 trillion. T
Post a Comment
Read more
More posts