A dishonest debate about the debt

July 15, 2011
The Wall Street Journal published an editorial today dreading what it called the "Obama Downgrade", referring to risk that the United States might lose the AAA credit rating on its debt. As always, it's the hypocrisy and blatant partisan angling that bothers me about such articles. A fair article would share blame for out of control spending between all of the last 4 presidents; each has contributed to the growth of entitlement spending which now threatens to overwhelm the budget. More particularly, policies of the Bush administration and the Republican Party (which controlled all of government for a large part of both Bush terms) exacerbated the debt and deficit problems of the nation in dramatic ways. This is nicely demonstrated by the chart the WSJ provides for its editorial, although you won't see it framed in quite this way. 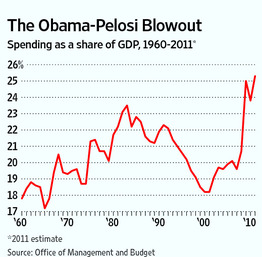 To put it in better perspective, look at this table (found here):